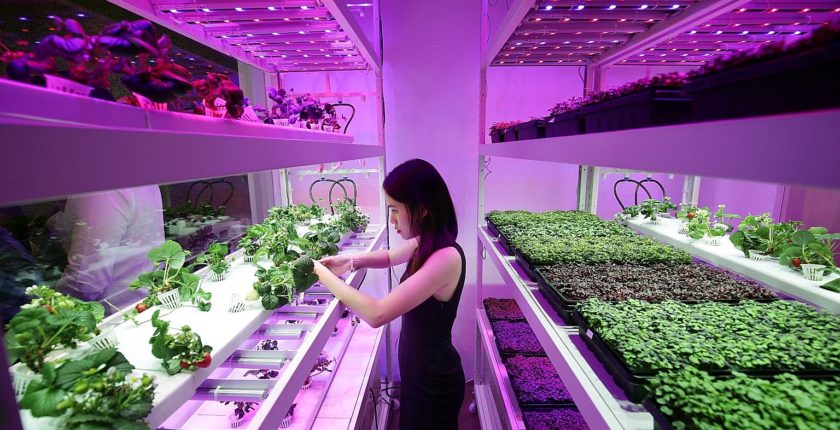 Urban Farming In Singapore Continues To Expand, Now With Strawberries

Urban Farming In Singapore Continues To Expand, Now With Strawberries

Now in selected supermarkets near you: Strawberries grown in a Singapore vertical farm.

On the sidelines of a visit to an R&D laboratory belonging to Sustenir Agriculture, which developed a method to grow strawberries here, Senior Minister of State for Trade and Industry Koh Poh Koon said government agencies will need to see how best they can change rules to assist vertical farms.

This means agencies may need to be flexible, and liberalise regulations, to accommodate the needs of such firms, he added yesterday.

Sustenir Agriculture CEO Benjamin Swan offering Dr. Koh Poh Koon a taste of locally-grown strawberries, which are on sale at $12 a punnet.

Acknowledging the challenges faced by the vertical farm industry, Dr Koh said one solution the Government will explore is to locate such farms near commercial companies, universities and R&D firms.

He explained that having such “clusters” will let urban farmers leverage on expertise in other areas to devise cost-effective technological solutions. He also acknowledged that finding spaces for vertical farms was a challenge, and said the Government would see what more it can do to help farmers who identify areas and buildings they are keen to set up facilities in.

Mr James Liu, co-founder of vertical farming company SING.Fresh, is one such farmer who had to grapple with the “significant challenge” of getting approval from various agencies for the use of unused spaces, which he said is hindered by land usage policies.

Most vertical farm companies grow high-value greens like kale and other salad vegetables that can be sold at more competitive prices compared to imported varieties.

Asked about the rationale for growing such crops, co-founder and chief executive of Sustenir Agriculture Benjamin Swan said this was to avoid competing against lower-cost greens like bok choy.

Figures from the Agri-Food and Veterinary Authority of Singapore (AVA) show there were 26 commercial indoor vertical farms as of end-April this year. In 2016, there were six such farms.

Still, more players need to be willing to adopt such business models even as the Government reaches out to them, Dr Koh said.

And as the urban farming landscape matures, the Government will also seek to engage residents. Dr Koh said the Government is exploring how to incorporate more urban community farming into newer housing estates.

AVA figures show there was only one commercial rooftop vertical farm as of end-April.

A spokesman for the Ministry of National Development, when asked about its policy on rooftop farming, said it adopts “a facilitative approach”. “We will continue to push for innovative projects to optimise our land use and grow the urban farming movement,” the spokesman added.

Asked if the Government can do more, Dr Koh said it will continue to look at how rooftop spaces like those on multi-storey carparks can be adapted for producing edible food.

“As we explore this space, and as interest grows, we will be able to do something more concrete,” he said.