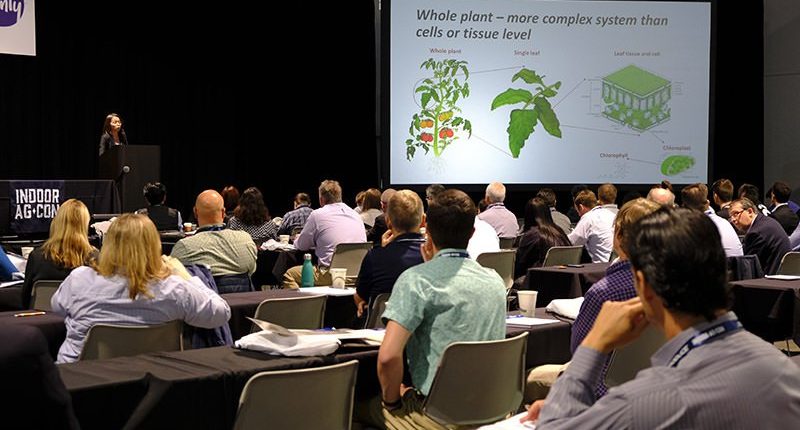 Want to know what’s happening in the indoor ag industry?

Attend an upcoming Indoor Ag-Con event if you are looking to learn about new technologies and network with the key players in the indoor agriculture industry.

When Nicola Kerslake, founder of Newbean Capital, started Indoor Ag-Con in 2013, she was interested in becoming a provider of capital to the indoor agriculture industry.

“Part of the rationale for starting Indoor Ag-Con was to learn the industry, to figure out who makes up the industry, who has interesting and promising technologies and what projects we could fund,” Kerslake said. “We define indoor agriculture as using hydroponic, aquaponic and aeroponic growing techniques in warehouses, greenhouses and containers. We try to be as inclusive as possible. We consider projects as simple as using hoop houses to the most sophisticated plant factories.

“Crops that we cover include leafy greens, mushrooms, alternative protein like insects, cannabis and biodiesel. We are also featuring non-food uses at our upcoming events. This would include pharmaceuticals and biodiesel feed crops.”

Indoor Ag-Con includes two-day annual events hosted in Las Vegas in the spring, and Singapore in the winter.

“At this year’s Singapore event in January we had people from 20 countries,” Kerslake said. “Las Vegas would be similar in terms of attendees participating from a number of other countries, including folks from Australia, New Zealand, Canada, Mexico, a large number of Europeans, particularly Holland, the UK, Belgium and Germany.

“There is interest from many countries and every growing type because everyone is trying to find a better way of doing things. There is technology that is being deployed in indoor farms in Asia and the United States that is coming from Europe. There are some very interesting and novel approaches coming from European producers. One that comes to mind is Urban Crop Solutions, a Belgian company that does plant factories and container farm technology. The company will customize around what a customer wants to do.”

Kerslake said there were several reasons that Singapore was chosen as one of the locations to hold Indoor Ag-Con.

“Asia has as much potential as the U.S. in this industry,” she said. “In particular, we are seeing fast growth in plant factories in places like China. We see some very interesting tech development happening in Japan and South Korea. As a consequence, Asia was a natural place to put our second location after Las Vegas. Singapore is easily accessible from places like Australia, Hong Kong and Shanghai. It also has the kind of quality venues and professional staffs that we like to work with.”

Another reason for choosing Singapore is government officials have been extremely supportive of Indoor Ag-Con. Enterprise Singapore, which was formed in April 2018, is affiliated with the country’s Ministry of Trade and Industry.

“At this year’s January event in Singapore, the senior minister of state, Koh Poh Koon, whose remit covers both agriculture and entrepreneurship came and spoke,” Kerslake said. “More importantly he spent several hours speaking with exhibitors and talking to entrepreneurs. The Singapore government is genuinely interested in seeing the development of the industry there.”

Kerslake said the participants who attend Indoor Ag-Con events come from a wide background of interests.

“About a third of the audience is growers,” she said. This could be a guy who is servicing local farmers markets all the way to some of the largest growers in the world. Another third is what we call “tech geeks.” These would include companies that are supplying equipment to the industry and have been for several generations. But it also includes someone who may have invented something in his garage who is trying to find partners or is looking to find a pilot project. One of the things that we really like about our events is that we see people come with an idea and then come back the following year having found partners and distribution for it.

“The third group of participants is what we call “others,” which includes academics, policy makers, investors and some non-profits, such as food banks that are trying to figure out how to incorporate growing. The largest piece of that “other” category is produce buyers and produce companies looking to figure out how they can be a part of the indoor ag industry.”

While Indoor Ag-Con attendance is largest at its major events in Las Vegas and Singapore, it has also held smaller events in Los Angeles, Philadelphia and New York.

“Each of our venues has capacity restrictions,” Kerslake said. “At the Las Vegas events we will have an attendance of around 600. Our East Coast events, which are usually capped at around 130 people, sell out quickly. This November we are collaborating to do a Pop Up Indoor Ag-Con during Edible’s FoodLovesTech in Brooklyn, N.Y., which is expected to draw around 2,000 people. This is the first time that we have done a conference during another group’s event. This conference will be more about New York food and the New York food eco system. We will have speakers from AeroFarms, Bowery Farming and Square Roots. This is a great opportunity for us to be able to introduce our conference to a different audience.

“We really try to adapt to the area that were in and try to include as much local content as we can. We are looking for a balance between what’s happening locally and where the newest and most interesting ideas and technology are coming from.”

When choosing speakers for the conferences Kerslake said she is not only looking for people who are knowledgeable about the industry, but have not spoken at events before.

“We start with a long list of potential speakers,” she said. “We are trying to find the newest, most interesting topics and we want someone who is attending to get a good grounding in the industry as well. We are also trying to have speakers who are not necessarily the ones that people expect.

“We had Mark Freeman, who heads campus catering at Microsoft, come to speak at one of our Las Vegas events. He had a completely different world view based on the number of people he is feeding every day. That is a really interesting perspective.”

“One is technology which includes robotics, automation, LEDs and growing systems,” she said. “This will include everything that’s needed to run a production farm. The second area is plant biology. That tends to be the newer trends that are coming including metagenomics and phenotyping. We also have some practical experience. We introduced some mini-workshops in Las Vegas in the spring. In Singapore we will be doing more workshops with a grower who is an expert producing in tropical climates.”

The third area of focus will be entrepreneurship.

“We focus on this topic much more heavily in Asia than we do in the U.S.,” Kerslake said. “There are a large number of new entrepreneurs coming into the industry. We look at everything from funding to crop selection to insurance, which we also covered in Las Vegas. We are also going to present information on farm failures and what causes them.”
One of the speakers at the upcoming Singapore conference will be Eri Hayashi, who is director of international relations and consulting at the Japanese Plant Factory Association.

“Hayashi will be talking about the use of AI and phenotyping in plant factories,” Kerslake said. “This is a great example of highlighting some of the academic research being done as well as being able to talk about how the Japanese indoor ag industry is using some of these more advanced techniques. The Japanese industry is one of the most advanced in the world.”

Indoor Ag-Con will also be introducing an unconferencing section at its upcoming events.
“We had requests from folks to have more unstructured discussions where people would come together and discuss particular topics,” Kerslake said. “There will be people who are knowledgeable in the industry who will lead discussions about a list of topics. The topics will be chosen before the conference. There will also be public papers available on each topic that attendees can read prior to participating in the discussions along with some suggested questions to think about.”

Indoor Ag-Con has collaborated with Enterprise Singapore, which has put up S$150,000 to sponsor prizes for Indoor Ag-Ignite, a pitch competition open to entrepreneurs worldwide. Started in 2018, the competition has been expanded for the 2019 conference.

”We are looking for technologies that come from across the world,” Kerslake said. “The pitch application is now online so anybody can apply from anywhere. Applications are due Dec. 10. This is not only a way for someone to receive major funding for their idea, but it is also a great way for them to gain some exposure in the industry.

“We expanded the 2019 competition to include travel stipends. The five finalists will receive a travel stipend to come to Singapore where they will pitch their ideas on the main stage at Indoor Ag-Con. Each of the three winning entrepreneurs will receive S$50,000.

“It is very easy to create a pitch competition where entrepreneurs are charged to come in and pitch. That is the way many competitions are currently done. It is very different what we are doing. It’s a significant amount of work and it’s a very different bench mark when you have a government entity putting up its own capital to do this.”

This article is property of Urban Ag News and was written by David Kuack, a freelance technical writer from Fort Worth, TX.